The spring melt is winding down on the St. John River and so far there’s been no major flooding.

The Public Safety Department reports the river is well below flood stage and the five-day forecast calls for levels to continue to drop. Experts in river restoration say there’s a way to increase the chance future freshets will go smoothly, too. Simon Mitchell of the World Wildlife Fund and Natalie Deseta of the Nashwaak Watershed Association say planting trees, shrubs and grasses along the river and its tributaries can help reduce the risk of bad flooding in spring and from extreme rain events.

“When we’re thinking about flooding,” said Mitchell, “our biggest issue is the frequency and intensity at which these events come.” Mitchell is a habitat specialist who studies the St. John River and a vice president with the Canadian WWF based in the Nackawic area.

“We need to do everything we can to hold the water on the landscape,” he said, “whether it’s trees or wetlands which act as a sponge and then slowly release that water.” Mitchell commends groups like the Kennebecasis Watershed Restoration Committee and the Nashwaak Watershed Association for the work that they have been doing.

At this time of year, the small trench dug into a hillside doesn’t look like much, just a line with some withered plants breaking up the monotony of the lawn. But look closer, and you’ll notice the yellow grass just downhill from the channel isn’t soggy and pooling water like the dip in the lawn just a stone’s throw away. Walk over there, and your shoes are sure to get a muddy soaker.

The small project, about the length of a canoe, is an example of a rain garden, populated with native, perennial plants. The Nashwaak Watershed Association created it a couple of summers ago behind its offices at the Ville in Marysville, the old Alexander Gibson Memorial School, with the help of about 20 volunteers in about three hours. This week the organization launched an appeal to local businesses and organizations that want to build something similar that could act as a demonstration site and provide homeowners the opportunity to learn how to do such a garden themselves.

“A rain garden that contains native vegetation and grasses will capture runoff, be it from your roof or the surface of your lawn, and channel it to an area where it can accumulate and be sucked down by these plants into the water table, as opposed to it just flowing off into a drain somewhere,” says Natalie Deseta, the group’s restoration and outreach co-ordinator. “By filtering that water that would normally sog out or flood your property, you’re taking out a lot of things we don’t want in our water table.”

Those nasty things include road salt, dirt, oil, even feces that might pollute areas and be harmful to humans and animals alike. The plants also serve a dual purpose. “A modern lawn garden isn’t very friendly toward songbirds and insects,” Deseta says. “They are kind of deserts, in that they have so little biodiversity relative to native organisms. They starve the environment of food. So by planting one of these gardens, it’s a food resource and shelter for these organisms.”

The Ville’s rain garden contains only native plants, such as bladder sedge, red currant, Jack-in-the-pulpit, ostrich fern and Joe-pye weed, all purchased from Dave Smith who runs his Save a Native Plant business right out of his backyard in Fredericton. The association enlisted a permaculture designer who used a surveying tool to show them where to put the trench.

The garden now forms a barrage between runoff from a parking lot up above, preventing the tainted water from flowing to a storm drain in another parking lot below. Marieka Chaplin, the organization’s executive director, encourages people who are interested in rain gardens to check out the association’s brochure or look online for ideas. In some cases, water has to be channeled to the best spot, ideally on a hillside. Once the plants or rocks are put in, they do the rest of the work.

The cost of a rain garden depends on the size and scale, Deseta says. “If you really want to have a beautiful rockery and make it ornamental, you can spring big bucks for it. But it can also be something relatively cheap. Native species aren’t particularly expensive, and they’re not rare.” Beyond being good for the environment, she says such gardens are great for peace of mind. Even the tiny garden at the Ville is a riot of colour midsummer, with buzzing insects and chirping songbirds.

The more we naturalize our lawns, the more connected our habitats are for insects and our songbird friends. If everyone has even just a small patch in their lawn that’s friendly to native organisms, we’re helping the overall habitat.”

Thanks @valentino_nora. It's great to have the support. Natalie Deseta is a eloquent presenter. https://t.co/6fsIjgFQTg

Rain gardens are designed to collect rainwater run-off, slow its movement, allowing it to filter back into the ground conducting it back into the water table. Read all about the @DailyGleaner article by John Chilibeck here: https://t.co/EnOMnHY8SX #eaunbwater #mynashwaak https://t.co/1BfSQnQXEL 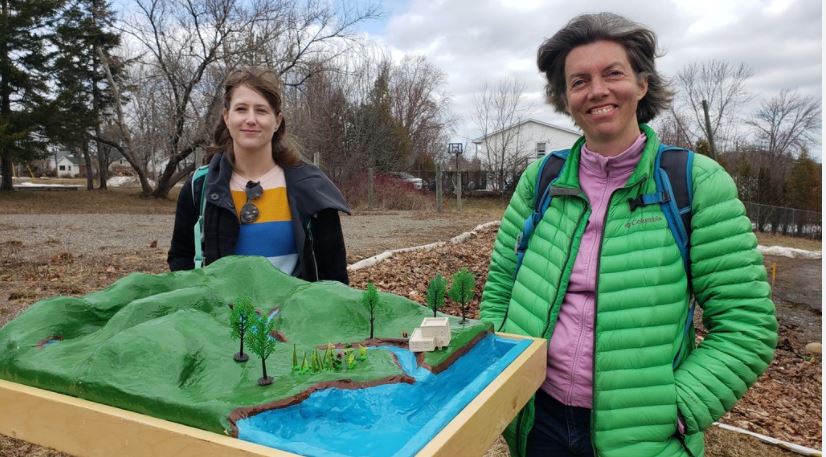